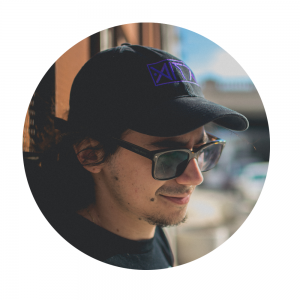 Tudor aka Animals in the Room is a 25 year old Romanian transplant turned Los Angeles native, driven by pure instinct and an electric soul.
Just a few years ago he was still screaming out his teenage angst in various local blues & rock bands as a singer and guitarist, but since then things have evolved. He began to produce genre-bending electronic music which garnered the attention of ~200,000 streams in under two years. Support from Earmilk, AuxLondon, Noisia, & even Skrillex, shows that the response to his vibes has been beyond phenomenal! From dimly lit clubs to the infinite expanse under the desert sky, Animals in the Room continues to push outside the box of experimental music , while also bringing together a community under his label & LA event platform, Sweet Tunes.
With over 60 shows played over the last two years in the LA & OC areas, a release on Noisia’s Division label, & an upcoming EP, it’s quite possible that AitR will be popping up near you soon. Performance highlights include SpaceYacht, Bass Waffles, Dessert Oasis, Tiny Town, One Love Fest, & Love Long Beach.

So far it’s been an amazing journey to connect with such wonderful creators!

Hope to see you at our next event out in SoCal!